The Irishman has agreed to fight on Dana White’s terms!

(Conor McGregor's next fight date has been set! McGregor tweeted, Dana White confirmed, and the main card of the fight is set for UFC 257 on January 23rd at 10:00 PM EST . The fight will take place at the Etihad Arena on Yas Island, Abu Dhabi, United Arab Emirates.)

The former UFC two-weight champion Conor McGregor and former interim lightweight champion Dustin Poirier are now nearing the final stages of signing a deal for a future fight, something that is sure to be a top UFC event.

Both fighters have signed contracts, with only the date of the fight remaining to be decided.

One thing we know for sure is that if the fight is to take place, then it will be held this year. This was on McGregor’s terms, who may be using this fight to prepare for his boxing bout with Manny Pacquiao, which will likely take place in early 2021.

Sportsbooks have already opened odds on the UFC event, with McGregor being the slight favorite with around a 62% chance of winning, and with Poirier around a respectable 40%.

Poirier vs. McGregor Odds and Picks

Betting Lines on Conor McGregor's Next Fight against Poirier

As we normally do, an analysis must first be conducted on the odds given for the outcome of Conor McGregor’s next fight against Dustin Poirier. In McGregor’s last five fights, only one has ended in a decision. Poirier has also not won by a knockout in two years, while McGregor finished Donald Cerrone in just 40 seconds in January last year.

Even despite the fact that the last meeting between these two was more than six years ago, we should not forget that their first meeting also ended with a knockout. According to sportsbooks, we should be expecting the same outcome the second time around.

As for the method of victory, everything here also looks pretty predictable. Despite the fact that both fighters have been actively involved in jiu-jitsu in recent years (Dustin is a black belt holder), it's no secret that wrestling is not their element at all.

The fight will definitely take place in the standing position and will begin to clinch at the net only if one of the fighters starts to run out of steam. Sportsbooks believe that it is worth waiting for the next knockout or technical knockout.

The odds for such an outcome are already getting lower as it becomes more evident.

Problems can begin if you want to place a bet on a specific round in which this fight will end. The thing is that both Conor and Dustin spend on average more than eight minutes in the octagon, but all their fights have some rather chaotic round statistics.

So do not count on a lightning-fast knockout in the first five-minute, as it was in the fight between the Irishman and Donald Cerrone.

If you do consider it risky to bet on the exact round, then sportsbooks also offer odds on time increments of a minute apiece as well in the fight.

It is already possible to bet on individual early outcomes with large odds, and here the bookmaker's favorite has significantly increased the gap. Recall that in his entire career, Conor has never lost by knockout or technical knockout.

The upcoming fight will be a rematch between Conor and Dustin. The fighters originally met in the Octagon in 2014 at UFC 178. At the time, both fighters were still performing at featherweight. The technical, quick and energized McGregor knocked out Poirier in the first round.

Even though Poirier has grown significantly over these past six years, all signs point to McGregor repeating victory in the second matchup.

After numerous rumors related to possible personal correspondence with Dana White, and through attempts to arrange a fight with star boxer Manny Pacquiao, we now have the news we have been waiting for. McGregor has finally signed a contract for a new fight.

Judging from the training videos as well as his last performance, there is no doubt that McGregor has gained significant muscle mass and consequently weights more than before.

His last fight with Donald Cerrone at UFC 246 proved that a motivated McGregor is still capable of exploding and stunning his opponents, completely eliminating the time for any salvation from the fight.

What to Expect from McGregor in this Rematch?

We will first expect a calm and relaxed start, as we saw in his fight with Eddie Alvarez. The Irishman is well aware that Poirier is far from being his most dangerous opponent. Conor, with a stony expression on his face, will spend the first seconds of the fight figuring out the optimal distance for himself, after which he will wait for Dustin’s attacks and attempt to work ahead of the curve.

In addition, as with every fight where McGregor is faced with a taller opponent, the Irishman will turn to his hard and deep low kicks to slow the American down and make him stagnate.

What started out as a simple meme, the “bald Conor = motivated Conor” is becoming a relevant reality. For McGregor, another win in the UFC will likely not serve as the start to a title run, but rather as a powerful image boost.

The Irishman already has the technical advantage, in regards to punching power and accuracy, which could become the decisive factors. McGregor is unlikely to take it easy on his opponent, despite his promise to donate $500,000 to the Poirier charity.

Check out the Sportsbooks with the best odds on the UFC!

In Conor's case, it is extremely difficult to talk about any indicative statistics of the last five fights due to the long pauses between fights and the unstable level of motivation and preparation.

For example, to explain the kind of inconsistencies we see with McGregor, we look at the first fight with Nate Diaz. McGregor was certainly not in the best shape as well as fighting in an unfamiliar weight category. His next two fights followed an incredible comeback.

Following that fight, many believed that Conor's form and skills would prove enough to beat Khabib. However, McGregor entered into the fight with the Russian in possibly the worst physical condition of his career. The last fight is the latest comeback, in which McGregor finished off Donald Cerrone in lightning-quick fashion, which has many fans putting their faith in the Irishman in Conor McGregor's next fight. 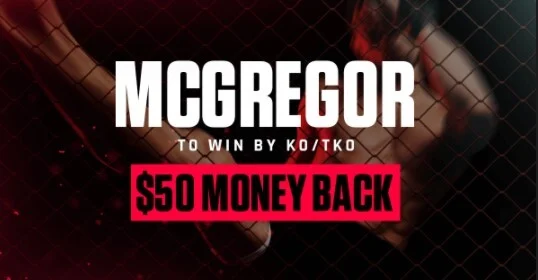 The fight between Dustin and Conor took place six years ago. Since that time, Poirier has become a better fighter and achieved decent results. Like Conor, he moved to the lightweight division, fought his way to the title and ended up taking it from Max Holloway, who was at the peak of his career.

Although Poirier getting caught up in the media world of scandals and trash are extremely rare, he has still managed to make his name known to the world. The fighter has defeated premier opponents such as Justin Gaethje, Eddie Alvarez, Anthony Pettis and Dan Hooker.

The fight between Dustin and Khabib Nurmagomedov was highly appreciated by analysts. There were several moments when the audience truly believed that the Russian was in real danger of losing the fight. In Poirier’s last bout, he dealt with Dan Hooker confidently and once again displayed his exceptional athletic endurance.

Dustin is currently in great shape and will be hoping to give Conor a long fight. As we know, the Irishman is not especially fond of championship rounds.

What to expect in the fight from Poirier

It should come as no surprise to anyone that this fight will most certainly take place in the standing position. Two top-notch brawlers will look to please the audience with beautiful combinations and a confident finish in the first three rounds. It is clear that in these six years both fighters have learned a lot and have also burned themselves more than once with their mistakes.

However, neither Conor nor Dustin have undergone critical changes to their fighting styles. Dustin still slows down when he dips forward after hitting with the far hand, he still likes to trade and exchange blows, and to finish opponents off at the rope. Even at lightweight, he looks to be slower than McGregor, adding to the validity of the sportsbook odds.

Of course, during the past six years, Conor has also become much more powerful, much more accurate and less stagnant in front of his opponents. At the same time, Dustin still opens up too often, and , despite the American’s amazing stamina and strength, walks a tightrope whenever an opponent is able to get a shot in.

If McGregor starts to pick up the pace in the first few minutes, then it will be exceedingly difficult for Poirier to stop him. As of now, the only hope for Dustin will be to bring the fight into the later rounds and to not overly assert himself in search of a knockout.

The Irishman’s arsenal of weapons looks even more intimidating now, and the chances are high that the keys to McGregor’s success will continue to be his honed technique and amazing timing that once shocked his opponents at 165 lbs.

Unlike his opponent McGregor, Poirier has consistently averaged two fights a year. Therefore his current form can be traced without too much trouble. Before his meeting with Nurmagomedov, Dustin was riding on a four-fight win streak.

He defeated fellow countryman Justin Gaethje as well as kocking out Eddie Alvarez.

Naturally, the winning streak ended on Khabib, but Poirier managed to give the Russian a hard fight and seriously shocked him with his hits a couple of times. After that, Dustin beat Dan Hooker by decision in one of the most memorable confrontations of the year, proving that he has enough endurance for all five rounds.