What is a Round Robin Bet and How Does it Work?

More advanced than a straight wager, understanding what a round robin bet is can be difficult when factoring in the different odds and payouts each new selection brings. In addition, with round robin bets you will have more than one parlay to keep track of.

This bet is nowehere near impossible to master, however. In this article, we will discuss exactly what a round robin bet is along with the main information and tips for players using this type of bet.

What is Round Robin?

A round robin can describe different things. For most, when they hear the phrase round robin they will think of the tournament format. This is a popular style of conducting tournaments for sports and other competitive competitions.

Many American tournaments and playoffs for professional leagues are not held in the round robin format. However, there are some exceptions, mostly in soccer. The most prevalent of these being the Champions League, which is the most important tournament for European soccer.

The way round robins work is simple. The teams are placed into groups, where each team in the group will play all of the other teams in the same group at least once. The teams will be seeded going further into the competition based on their win/loss records during the round robin segment.

What is a Round Robin Bet?

There are two different main round robin meanings. One is a popular tournament format, which we just discussed. The other, a round robin bet, is an advanced wagering type which in principle gives players a better advantage when parlay betting.

The definition, structure and goal of a round robin bet can be summed up in the following.

Round Robin Bet: a round robin bet is three or more different parlay bets that all include some variant of the same games as the others. The idea of round robin bets is if one of the games in your parlays loses, there is still a chance to win at least one parlay and make a profit.

The problems with parlay bets arise due to the impracticality of making them regularly.

Parlay bets, while fun, have a few key drawbacks that can especially make the most experienced of bettors hesitant to play them.

Since regular parlay bets have such low odds of hitting, a player should never expect them to become a successful, long-term option of betting. This is where round-robin betting comes in as a sort of middle ground between single bets and parlays.

We know that the goal of a round robin bet is to provide more security for parlay wagers. So how are they able to achieve this? The strategy behind a round robin is that the wagers are put together in such a way that even a loss will not end the entire round robin, like it would a parlay bet.

This is a simple to understand, and not necessarily a difficult sector of parlay betting to implement. The round robin bet strategy works, in that it allows bettors to lose one game and even remain profitable.

It is achieved by using the same betting selections, but with different combinations in each parlay. 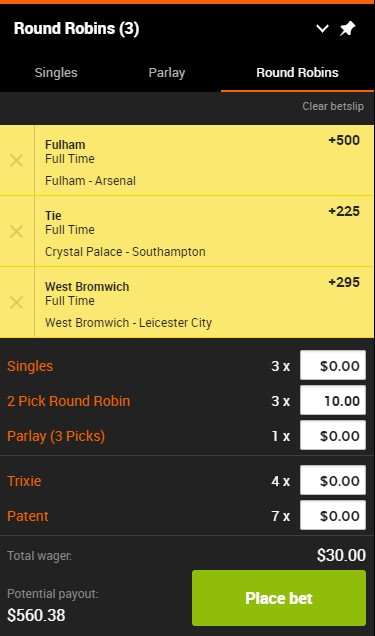 Are Round Robin Bets Worth it?

When looking at round robin vs parlay, the obvious difference is that in round robin bets there will be multiple parlays (at least three teams in each) instead of one and will most likely be much smaller than a regular parlay. The limit for the number of teams in a round robin bet is usually ten.

The other difference between round robin vs parlay, however, is the advantage the strategy gives to players since each of the round robin bets that you make will directly correlate with the others. This is because you will use the same betting markets for all the different parlays. The bet outcomes will not change between the round robins.

For example, if you decide to bet on the spread for the New Orleans Saints (+6.5), this exact same bet will appear in at least two of your round robins. If you choose to include three teams, you will have three different parlays that make up your round robin bet.

The total also depends on the number of teams you wish to include in each parlay.

The main appeal of round robin bets are that they give each player the opportunity to lose one game and still make a profit. The more selections you include in your round robins, the more games you can afford to lose.

For players who enjoy making parlay bets, round robins can certainly be worth it, as they provide more of a safety net than regular parlays.

Let’s go through an example of putting a common round robin bet together.

Example with a 3-Team Round Robin

Let's say you have chosen your three teams for round robin. You take the total over 2.5 goals in a game between Juventus and Roma, the Pittsburgh Penguins (-1.5), and the New England Patriots moneyline. Since we have decided on three selections we can now make our round robin bet.

Each selection or betting market will be included in two of the three round robins.

The final round robin bet will include Juventus and Roma over 2.5 and the Penguins +1.5.

As you can see here by our three team round robin format, if one of the selections loses or fails to cover/beat their spread, one of the three parlay bets will still be a winner and the round robin will have been successful.

Although one out of three will not seem like a big win, if you select sufficient odds you will still be making an overall profit, which is the key goal for any type of bet.

We will have a stake of ten dollars, which will be placed on all three parlay bets. So with a $30 total stake, we can figure out the various payouts and profits based on our results.

All three games winning would of course be the optimal situation, but allowing us room for at least one loss is what makes the round robin bet effective. Based on these numbers, there are three different outcomes where a profit will be made.

Odds and Profits on 3-Team Round Robins

Selecting sufficient odds is essential for making round robin bets.

The process for figuring out how much money you will make and how much you can get away with and still earn a profit is the next essential step for successful round robin betting. In this case, we will be trying to get away with losing one out of three games and hoping it will still add money to our bank.

Let us take a look at how the math works out to make this possible.

In this example we will be spending $5 on each bet in our three team round robin.

Now we already know that these round robins will be profitable for us because the profit from winning one parlay of the round robin bet is way above $15, or the total amount we will stake on all three.

The best news is that the formula works, so it does not matter how much money you stake. By putting $10 on each parlay and you will finish with a profit of $182.40 for losing no games with an original stake of $30.

Of course in the first example in the chart, if you are to win all three of the games, you would walk away with a profit of $54.72. One loss means a profit of $15.24, and lose two or more games and your entire stake will be gone.

You will still be taking a risk, but a significantly smaller one with a round robin bet than with a parlay.

Looking around online while researching round robin bets, you may stumble upon round robin generators. Unfortunately, these are not used for betting, but rather for generating real round robin tournament formats.

Round robin calculators on sportsbooks cannot be understated, as they give you the most convenient way to calculate round robin bets. There are a couple of different terms for this tool, which may lead to some confusion.

It does not need to be that way however, as round robin calculators and round robin parlay calculators are actually the same thing. They will perform the same functions and both be available on lots of online sportsbooks.

The Limits to Round Robin Bets

Just as with parlay betting there is a certain limit to the number of teams you are including where it starts to become less profitable to make these bets instead of just making straight wagers. With round robins  the long term profit will likely be present in those that have only two or three teams.

The problem is as you increase the total teams and the number of teams in each parlay you will soon start having to make a lot more bets due to the massive number of nominations available. The formula we used earlier will not apply with these new variables. We will have to use the new one which will not be on your side.

Taking eight total teams and putting them into four-team parlays gives us a staggering 70 different combinations. Even if you are only wagering $10 on each of the round robin bets, you will have to immediately shell out $700 just for this one bet.

The odds for each round robin bet (assuming that we are betting the standard NFL spreads),would be at 13.31 (+1231), or a profit of $133.10 for each. The problem that we run into is that if one team loses now, we are already losing a significant number of round robin bets.

Add in the fact that we are not expecting the remaining seven games all to hit (or else we would just make a parlay), so we can factor in a few additional teams losing as well. Odds of -110  do only have a probability of 52.4%.

If you lose one less at five, your entire bet will be lost. Going 4-4 would only see the player returning a fraction of their original stake.

The main appeal of making a round robin bet is the fact that even if one of the teams you selected is not successful, you can still make money if the other two succeed. So basically, you are increasing your payout and at the same time essentially giving yourself a risk-free bet.

Some sportsbooks will even offer software for the player to automatically put together round robin bets, due to their increasing popularity. They are a good strategic wager if you understand the main few points.

Adding too many teams and round robins parlays to your bet will eventually lead to the odds crushing you. Instead focus on key points.

Finding balance between the odds and the probability of an outcome is how players will make their money over long periods of time. Once you start putting them together in practice, you will naturally start to better understand how they work and different nuances about them that work for you.

We would suggest that if you are a complete beginner that you start by focusing on straight wagers and maybe try out a round robin parlay or two just for fun and experience.

Doing this will give you a better understanding of both types of bets and will prepare you to move into more advanced betting in general.

See all Legalbet USA Sportsbook Reviews!
Previous: Types of Horse Bets and Strategies for Beginners Next: What are Prop Bets? Learn About Making Prop Bets