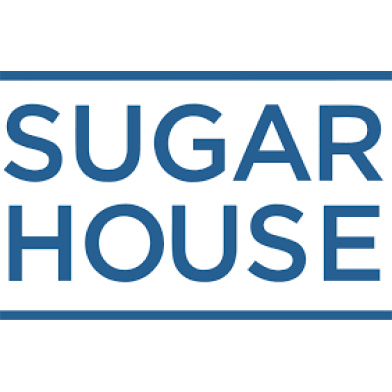 SugarHouse Sportsbook online covers all of the major US sports as well as a decent selection of other sports. Baseball, basketball, hockey and football are all included.

In total, there are currently around 15 sports featured on the online SugarHouse Sportsbook.

The number of leagues differs by sports, but the more popular sports will also have the biggest number of leagues. In addition to the main sports, you can find soccer, tennis, UFC/MMA and boxing on the site.

Soccer, being so popular, has some of the most markets available whenever the season is in play, along with football. In addition to the major sports, SugarHouse Sportsbook also features bets on cricket, cycling, rugby, darts, table tennis and golf.

In the motorsports section, there will be different types of racing sports bets. The races that you can bet on here depend on the time of year. There will normally be a good number of markets available for NASCAR.

There are four leagues and tournaments available in the basketball section on SugarHouse Sportsbook. The FIBA World Cup Qualification- Europe is the only tournament currently featured on the site, with about 40 different markets available for each game.

The NBA may be the premier league in America, however the EuroLeague features the highest number of markets with more than twice as many as the NBA for each game.

These will include main bets like bets on the moneyline, point spread and totals.

The NBA usually has around 80-90 markets available for each game but can reach up to over 120. The types of markets included here can be moneyline, spread and totals bets, player props, game props and a list of other bets.

The sport of hockey is given a lot of attention on SugarHouse, as every major league on the site will average around 150 markets for each game. The leagues include the NHL, Finnish and Swedish leagues and the KHL.

As an added bonus, there are even wagers available on the AHL which are not featured on many sportsbooks. The markets for the AHL are about half of that for the other leagues at around 70 per game.

NHL games have a large selection of markets and many are available for live streaming on the site.

There is also a cool parlay builder feature that will give the player a good selection (usually around eight) of markets to choose from and fuse together to make a parlay for a game without having to do the searching.

Things like the puck line, total over/under, correct score and more can be included in the parlays.

In the soccer section for online sportsbooks, it is almost an unwritten rule that this section must be jam packed. That the player must have as many options as possible for soccer bets and SugarHouse knows the code.

The top five leagues, as well as the MLS, Russian Premier League, Dutch Eredivisie, Ireland Premier Division and Liga MX are all included. Markets vary depending on game regardless of league.

Some games have as low as 50 markets while others have over 250.

The exception to this rule will be the most popular leagues which will always have around 200 markets. The MLS stays at around 140 markets per game. Major tournaments like the UEFA Champions League, CONCACAF, Copa America and more as well as international friendlies can also be wagered on.

The live section on the online SugarHouse Sportsbook does not differ much from the main pages. One clicking on the ‘Live Right Now’ button, all of the events that are currently being played will be listed down the center of the screen. 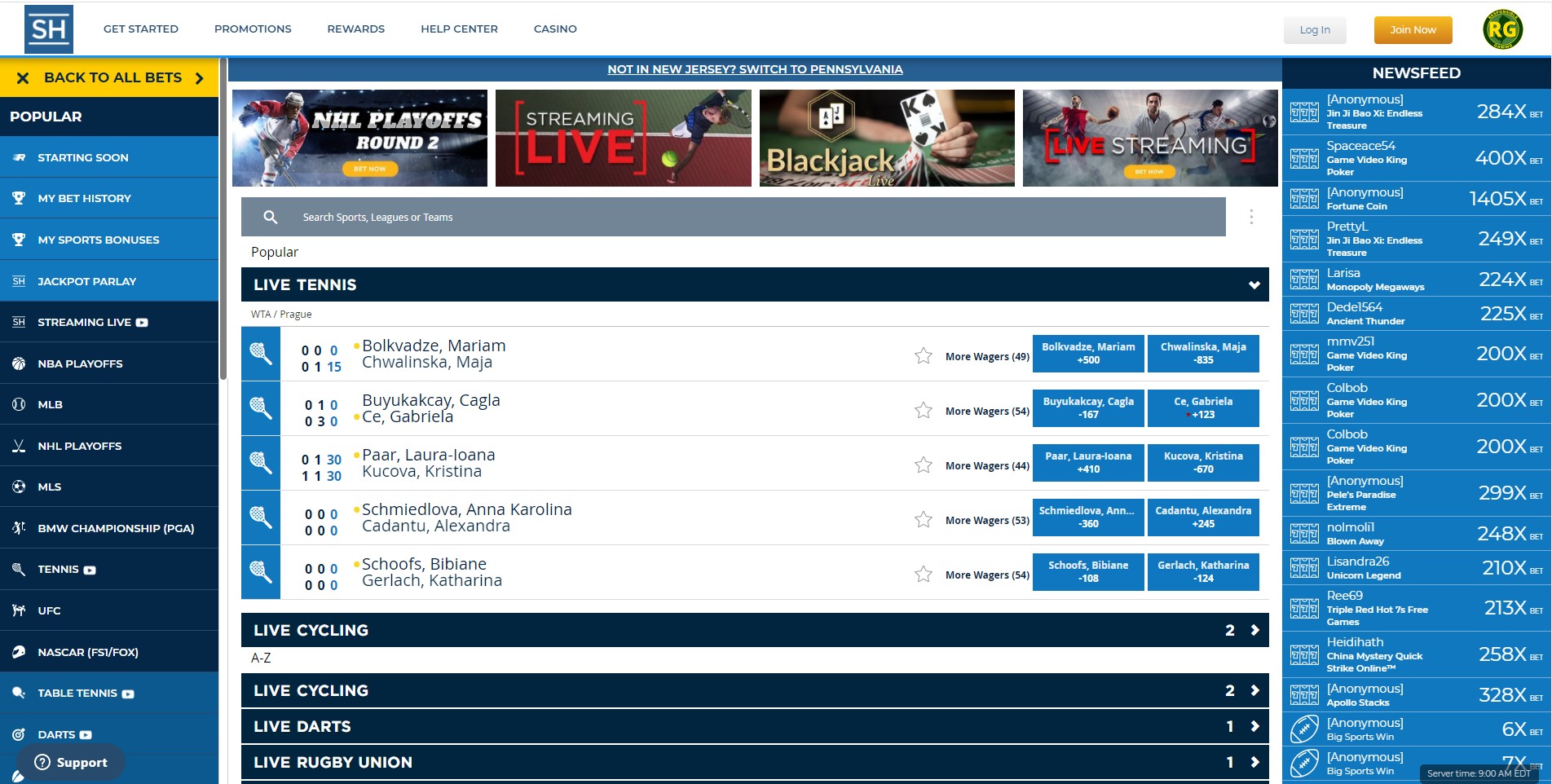 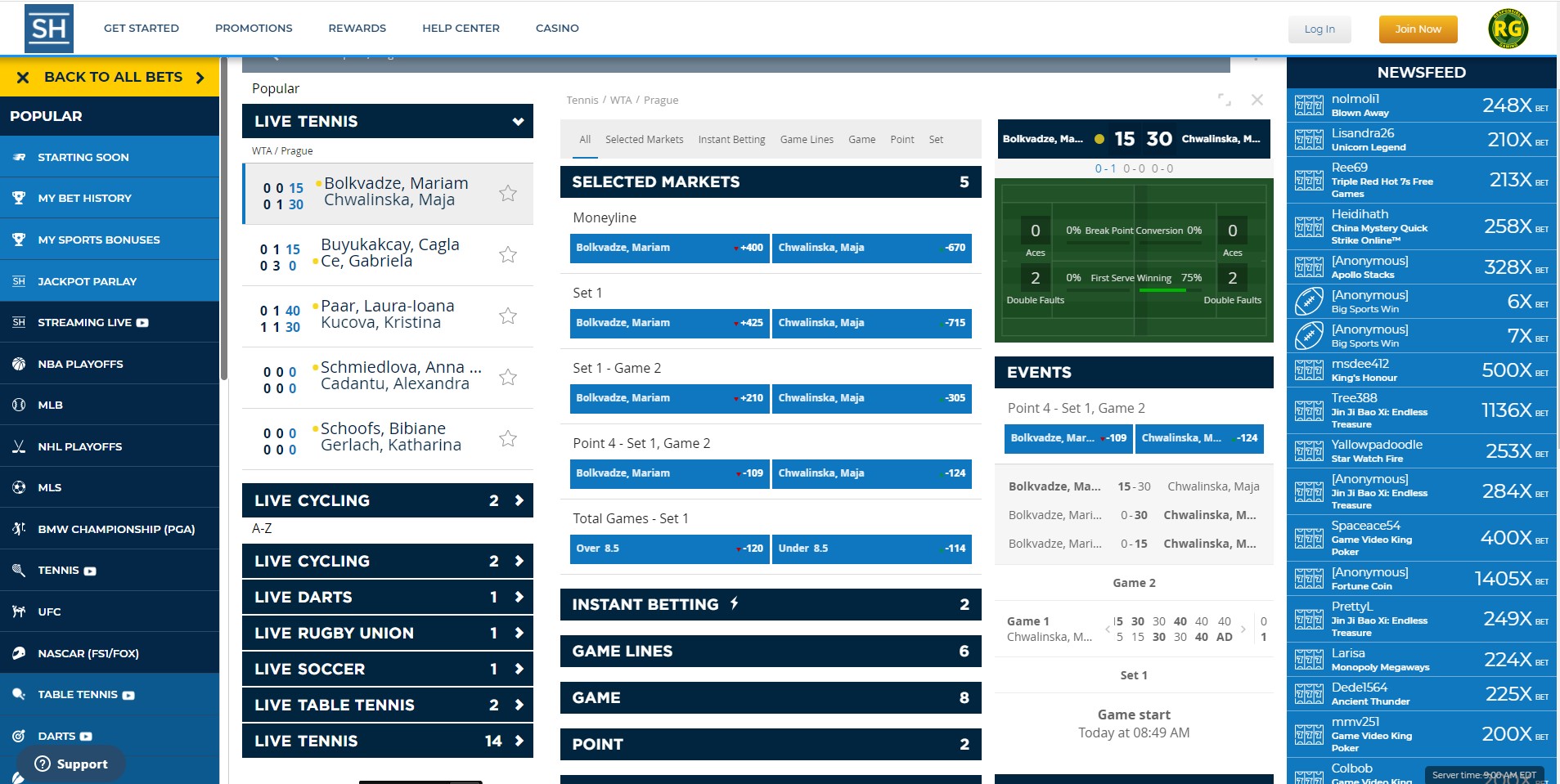 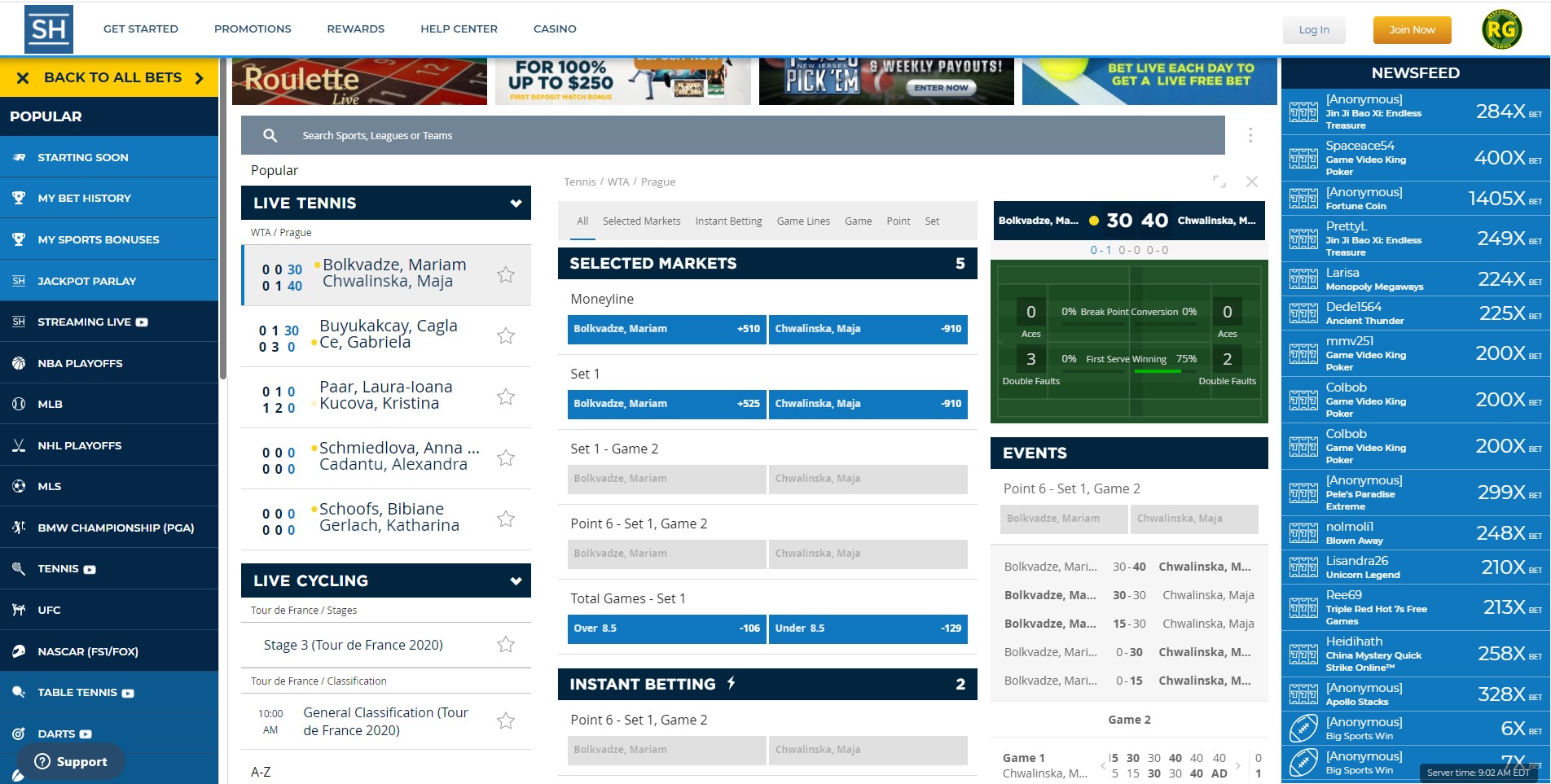 The scores will be on the left of the listings while the odds for the event will be on the right. Both will be constantly updating throughout the duration of the game. Clicking on any of the listed games will take you to the match tracker.

This will display the score at the top, with various statistics from the game on the tracker screen.

For example, if you are looking at a tennis match, then you might see break point conversions and first serve winners, as well as aces and double faults for each player. The different markets and odds will also still be listed below.

For registered sportsbook users, there is also live streaming available on the site for some events.

The live streaming section will not only show which games are being played at the time, but rather will have a schedule of all the events that will be live streamed throughout the day. The streamed events include, but are not limited to basketball, tennis, hockey and soccer.

A lot of NHL games are streamed on the site, which is great for hockey fans. Betting while watching the live stream is quite comfortable.

The screen will be at the top of the page, while the markets and odds will be listed below. So, while viewing the event, you can quickly make a wager by selecting a market and entering your wager in the bet slip.

Neither of these things will take you off of the live stream view unless you go way down into markets. Since the bet slip appears on the right side of the screen, you can also preselect bets and when the time is right, simply click the ‘place bet’ button.

The odds will be constantly updating, so you will need to approve odds changes before betting, which can be done with the simple click of a button.

SugarHouse Casino was opened on September 23, 2010 in Pennsylvania. The company was granted its gaming license on December 20, 2006 by the Pennsylvania Gaming Control board and expanded operations to New Jersey in 2016.

Sports betting began in 2018, and SugarHouse Casino was the first to offer it in the state of Pennsylvania. In addition to sportsbooks, the company also has online gambling and casino offerings on all of its sites. Today, SugarHouse operates online in both Pennsylvania and New Jersey. 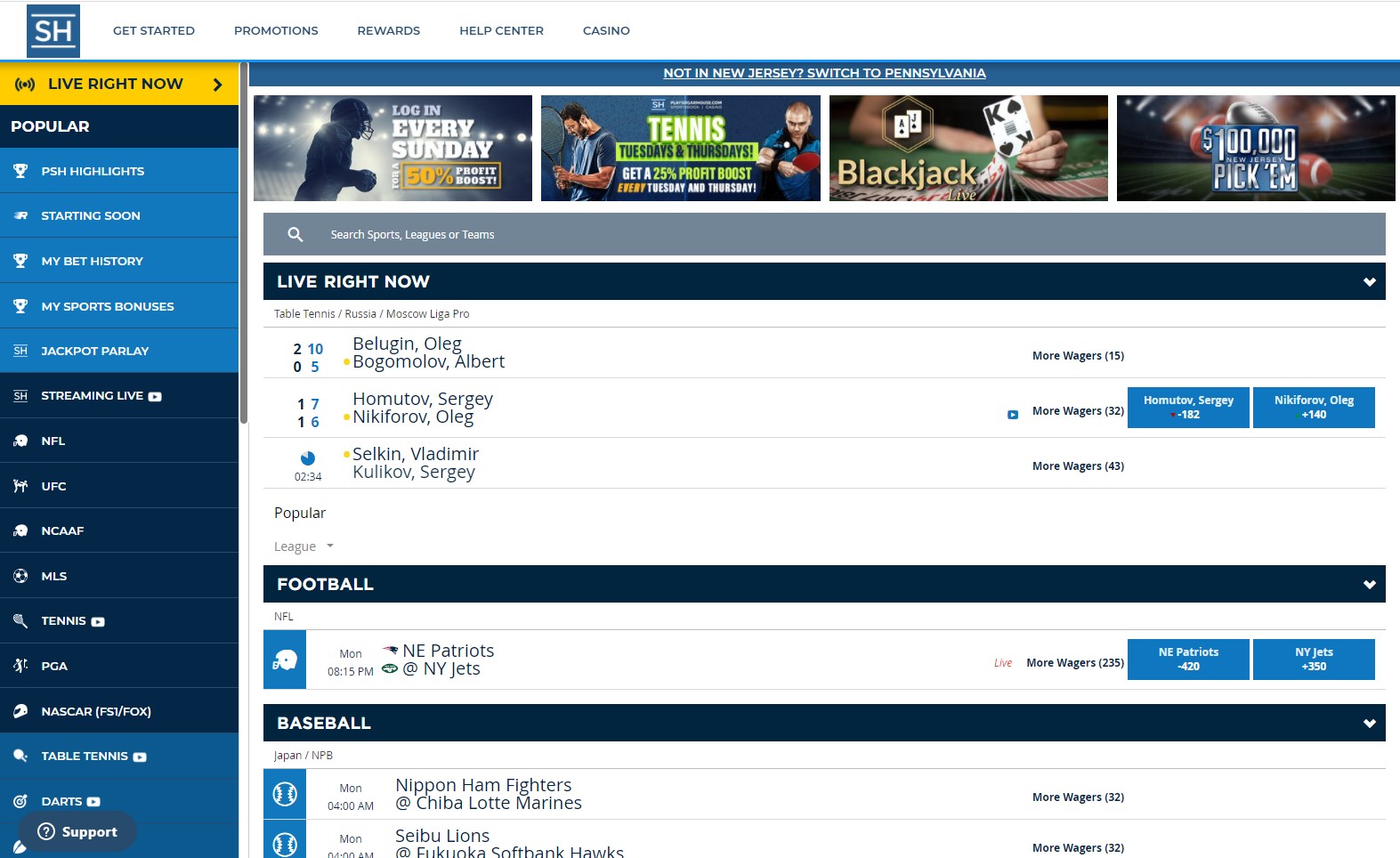 There are plenty of markets available as well as popular sports and leagues. The site features different bonuses as well as a live section that includes live streaming for many top games. One thing that really sets this sportsbook apart is its attention to its users and target fanbase.

There is also live streaming and a live feed on SugarHouse Sportsbook showcasing users who have recently won major bets.

It features different bonuses and games for users to compete in when they are not betting, things 'Jackpot Parlay’ which lets the players select bets for a parlay from a random pool of bets in the time frame and number of bets they want to choose. 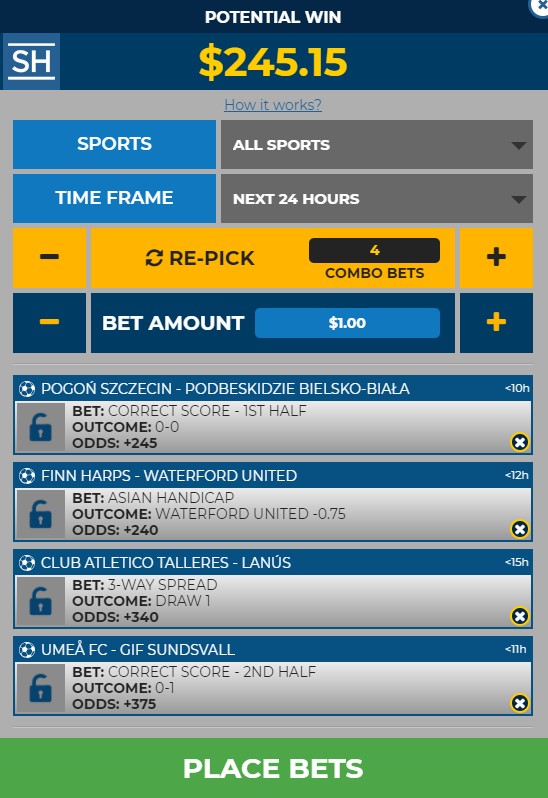 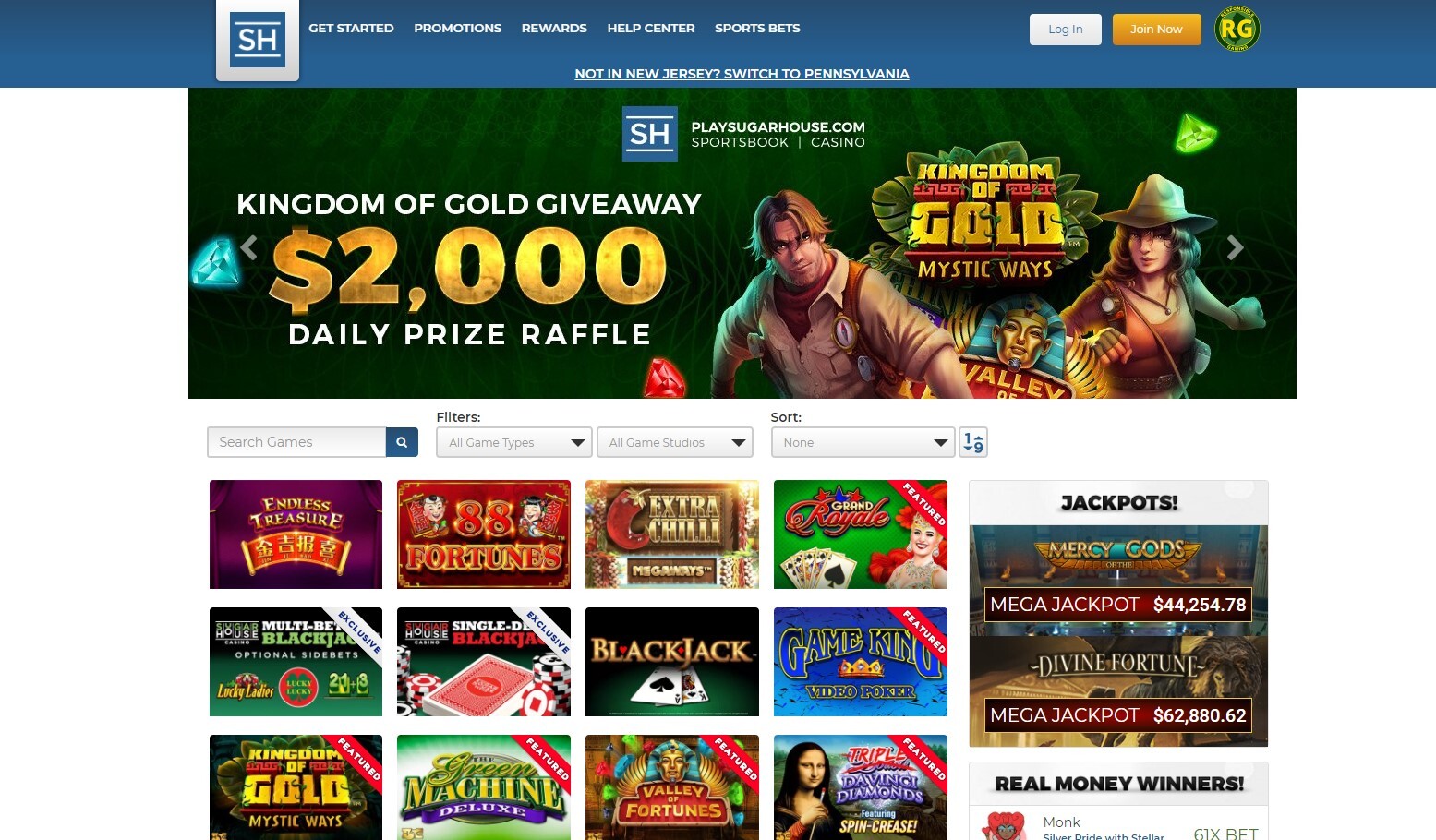 This section brings everything players love about the original SugarHouse PA to the desktop and mobile apps. After signing up for the sportsbook, any player can switch back and forth between betting on sports and playing on the SugarHouse casino online without creating a seperate account.

Fans of the SugarHouse Casino online can find a wide selection of slot games that get consistently updated. That's not all, as the casino section also includes such features as table games, virtual sports betting, online poker and more. There's plenty to do here, and the quality of the SugarHouse Casino online matches up well with the rest of the site.

Where is SugarHouse Casino?

Although the SugarHouse Casino online is conveniently wherever your mobile device currently is, there are a couple of locations where you can stop into SugarHouse casino or sportsbook in person. SugarHouse currently has locations in both New Jersey and Pennsylvania.

Although neither location bears the SugarHouse name, they asre both involved with the brand. Rivers Casino operates under Rush Street Interactive, same as SugarHouse with a similar experience.

Golden Nugget is partnered with SugarHouse in New Jersey, and players can make payment transactions at this location.

BetRivers and SugarHouse online share the same design and many of the same features. However, both brands operate in different states, giving the company extended reach across the country.

Replenishment and withdrawal of funds

$10
Check with Sugarhouse
None
Immediately

At least
$10
Max
$500 per day
Payment. Commission
None
Payment. Deposit time
Around 20 minutes

$10
Check with Sugarhouse
None
Immediately

$10
Check with Sugarhouse
None
2-5 business days

$10
Check with Sugarhouse
None
10-14 business days

Go to the website of the sportsbook
playsugarhouse.com
Review rating: 0 / 5
Rate:
Add a review Leave a comment
Unfortunately, most people only write reviews when they are dissatisfied, and when they are satisfied with everything, they are silent. We ask you to also fill in the «Good» field so that your feedback remains as objective as possible. We are sure that you will be able to specify both pros and cons of the sportsbook PlaySugarHouse.
Comments