It is no secret that the American hockey season truly begins to heat up come the NHL playoffs. Some fans will even forgo most of the NHL regular season schedule and only begin to watch when the first-round of playoffs begin.

This strategy guide will give you the necessary information to make better bets on the NHL Playoffs.

NHL Standings for Teams with the Most Stanley Cups:

Betting on the NHL can provide the player with some difficulties, as the league itself is very competitive. In the NHL Playoffs, the competition becomes even tighter. However, due to this fact the player will also find high odds in the NHL, even on the favorites.

There are two different conferences and four different divisions in the NHL. In order to advance to the NHL Playoffs, a team must place third or higher in its respective division. Then, the next two teams in each conference with the highest amount of points will also be taken, giving both sides of the NHL playoff bracket eight teams total from each conference.

The playoffs are played in series of seven games. The odds in NHL Playoffs will almost always be over +100 for each team. Though it can be hard to predict these games, there are sites that do extensive research and offer picks resulting from their information.

One site that provides lots of good information for betting on the NHL is Oddsshark, where you can find NHL score predictions, public betting percentages and even computer-generated results for each game., among other information.

The betting lines in the NHL will be the exact same as the NFL betting lines. You will find three different markets, which represent the majority of all NHL bets made.

The markets that make up the NHL betting line: 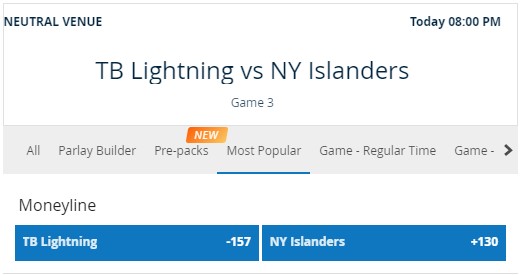 There are also markets allowing the player to combine two of these NHL betting line markets together. Obviously, you cannot combine the puck line and the moneyline, but you can take either one of them combined in the bet slip with the over/under.

There are usually also varying point totals and puck line with odds to match. For example, if you are given 5.5 on the betting line there will usually also be lines for 4.5, 6.5, 7.5 and so on. The safer that your bet appears, the lower the odds will be.

Betting lines for the NHL also have many sites offering their free predictions on these markets. Making the best use of these sites is essential for winning bets on NHL games.  However, much of the statistical and predictive information is available in our betting center.

Picking which team will win an NHL game is a very difficult task. Like other American sports leagues, there is so much talent that even the team that is last in the NHL standings can beat the first-place team.

We have previously mentioned oddsshark for NHL betting, however they are certainly not the only ones. There are dozens of sites that offer free NHL predictions including major sites like the NHL section at ESPN.

These sites will the list the NHL games to be played that night and give their full analysis on which bets you should make based on their own research and information.

Some of the things you should look for on NHL predictions sites:

Many NHL predictions sites will have some of these things but finding one who meets all the criteria on one site can be a difficult task. There are other things that these sites can offer as an added bonus for the player.

Many of these sites offer their information for free, however paid experts also exist. Make sure to do your own research on these experts (although most will happily boast their stats) to see if its worth the price they ask. The best advice would always be to start with free sites at first.

Some of the best handicappers for NHL picks (by ROI):

The more you bet on sports, the more that you will realize that winning is not really everything. Of course, you need to win to make money, but look at the records of the experts above. The best win-loss record sits at just over 60%, which is shockingly good for sports betting.

The most important thing for any player to remember is to find good value in the odds.

Be sure to look for games where the odds do not entirely match up with a team’s chances of winning. With NHL games this can be difficult but there are always opportunities to be found, these NHL experts are great examples of that.