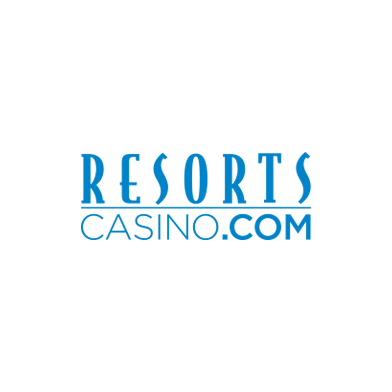 When looking at the Resorts Sportsbook, we averaged the margins from popular sports and leagues that are featured on the site. From here we can determine where players can find the best values for margins. The markets looked at include the main outcome and the odds on the main over/under line.

As expected on sports betting sites, the section for soccer betting is normally very extensive. We looked at some of the most popular leagues as well as some of the lesser-known leagues. For games in the top league Serie A, we found average margins of 5.82. In an average soccer league like the Dutch Eredivisie the margins were calculated to 5.77.

Both of these numbers are on the low end of our normal category. The margins for the lower league the MLS were slightly better averaging at 5.31. The total average for all leagues was at 5.49. This puts it higher than average on the rankings in the normal category.

A lot of tournaments and competitions are featured on the Resorts Casino Sportsbook. The total averages from the competitions reviewed was 6.31. This ranks in the normal section for margins on Legalbet. For the ATP Hamburg we found average margins of 4.53. In the French Open Qualifiers, we found an average of 8.08. We looked at the result market solely when figuring out averages from each of the tournaments.

Resorts Casino Sportsbook has two of the top hockey leagues listed. The total margin average for both of these leagues is at 4.41, which puts the sport in the good category. For the NHL, the average margins found were 4.32, while for the Russian KHL margin averages were at 4.5. The markets used for each of these averages were the results market and the over/under on the total number of goals scored.

Resorts Casino does not necessarily have an extensive sportsbook with lots of distinctive sports available, but they do cover all of the main ones. In total, you can find fourteen different sports featured on the website.

The depth and leagues within these sports can sometimes be quite impressive, however. For example, basketball features bets on the NBA, FIBA World Cup, NCAAB and the Euroleague. However, none of these sports are anything out of the ordinary and can be found at most sportsbooks in New Jersey.

The main four American sports (baseball, hockey, football, basketball) can all be found. In addition to these four you can bet on popular world sports such as soccer, tennis and cricket.

There is also a section titled ‘Boosted Odds’ where the player can find odds that are currently much higher than they originally started at. These can be featured for any sport and the odds can be boosted by more than +2000.

Even in America, soccer is still popular when it comes to sports betting. Resorts Casino knows this and does not disappoint. The company offers many different leagues beyond just the most popular ones. There are also individual league tournaments to bet on in addition to European Tournaments like the Champions League and the Euro.

You can make bets on leagues in countries like South Korea, Slovenia, Austria, Israel and more. The most impressive thing here is the number of markets available for each game. It seems that no matter which county’s leagues you wish to bet on, you can find more than 50 markets available for the games. In the bigger leagues like Serie A and La Liga, you can find well over 100 markets for each game.

For example, in a game between Inter Milan and Lecce there are 154 markets listed. The main bets are available with multiple odds variants such as final score, totals and handicap bets. You can also bet on the exact final score, how the first goal will be scored and the winning team’s goal margin. Many of these bets are available for one half as well instead of for the entire game.

In the specials category, you can wager on who will be the first and last player booked, whether a team will miss a penalty or whether an own goal will be scored, as well as many over/under bets.

A decent number of bets regarding corner kicks are offered. There is also a list of all the players expected to feature in the game where you can predict who will score the first, last or just any goal during the game. Asian odds are also in this section for many of the category of bets offered.

The country's national pastime of baseball is usually represented fairly well on most American sports betting sites. For the Resorts Casino section, it is common to find more than 50 available markets on  the  individual games.

The MLB is the only league featured in this sport. There are quite a few over/ under bets on display for each game and there is also an ongoing bet called race to runs. This is where you can bet on which team will be the first to reach two runs, three runs, four and so on. You can of course bet on the moneyline with or without handicaps.

The players section of baseball features some interesting totals wagers for star players. For example, in a game between Cincinnati and Miami, you can make a bet on the total number of home runs and total number of bases are cleared by Freddy Galvis.

Or, you can bet on the total number of strikeouts or the final ERA of pitcher Pablo Lopez. In addition to these markets, you can place bets on whether there will be extra innings, which inning will have the most runs, or whether or not there will be a run in the first inning.

The football season is not quite here yet but the bets are already piling up on Casino Resort’s sportsbook. Although the games being played are only preseason, there are still many bets available for football including an impressive listing of prop bets.

The leagues available to bet on include the NFL, NCAAF and the CFL. For futures bets on the NFL, you can bet on which player will win the MVP award out of a pool of selected stars. This same format is repeated for the most passing, receiving and rushing yards throughout the season.

However, you can also pick individual stars from the league and bet on their player totals. For example, you can predict whether Carson Wentz will have over or under 4250.5 passing yards for the season. These totals are available for a wide array of star quarterbacks, running backs and wide receivers.

Prop bets can also be found for teams as well. You can first bet on whether a team will make the playoffs or not. Most of the teams are available for this prop bet. You can also bet on which teams will win their respective divisions.

The bets for individual NCAA games are similar to the ones for the NFL. The winner, handicap and totals bets are the main ones that players choose. However, you can also bet on the first and last teams to score. This is available for the full game, first half and the first quarter.

The winning margin also has a large number of variants to it. All available are winning from 1-6 points to winning by more than 43 points. In addition to these bets you can wager on whether or not there will be overtime and which half will produce more points.

The live section on Resorts Casino is opened in a new tab and features a lot more sports then the ones you can originally bet on. Sports like table tennis, horse racing, curling, beach volleyball and many more are on the left side of the screen. You can view all of these sports in the live center like you could with any of the sports for betting. 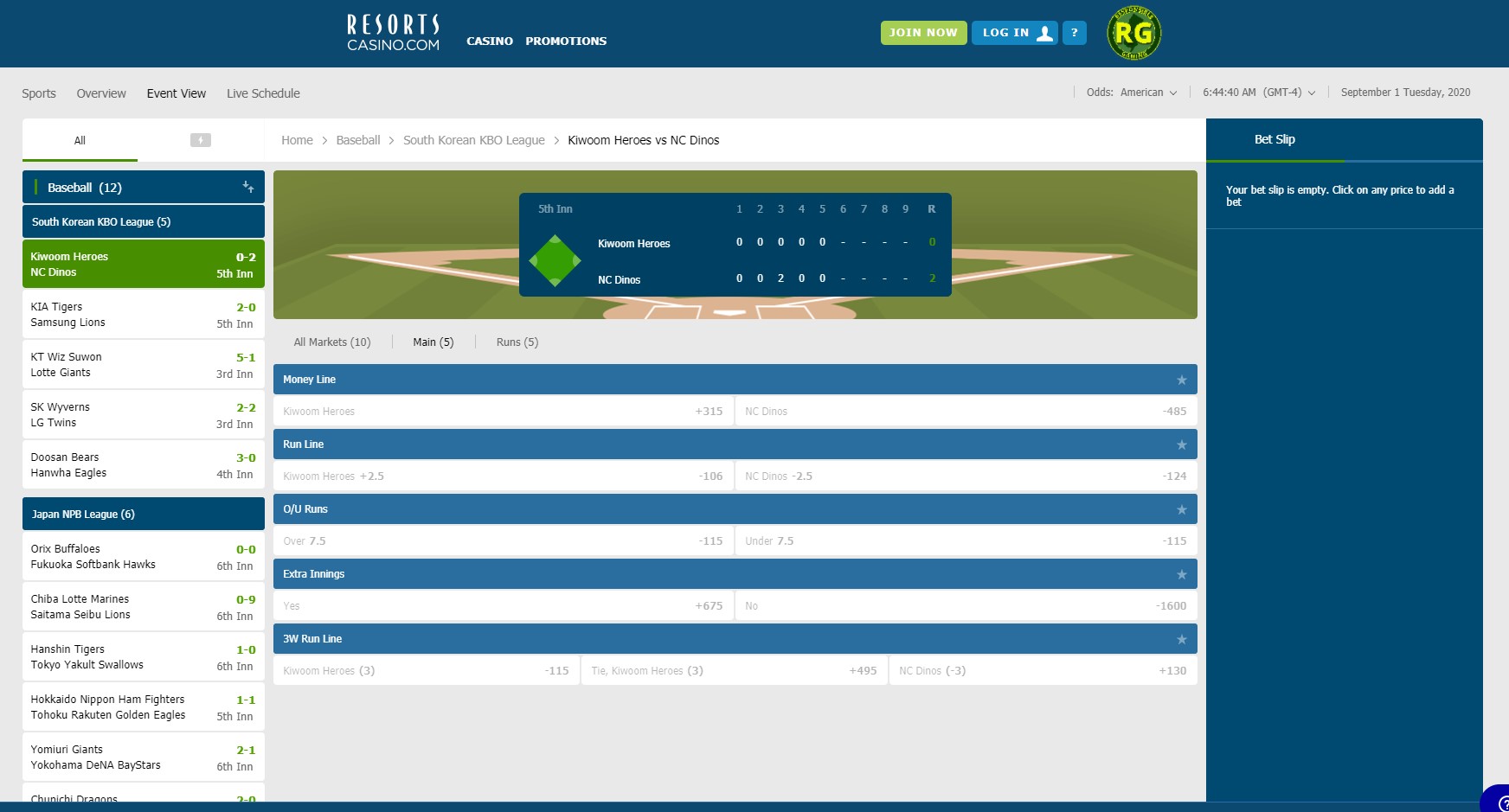 You can search for live games by the date, start time or the sport. You can also see the live scores of all the games being played or that have already finished in the center of the site. For each game you select in the live section, you have the opportunity to view either the “game center” or the H2H statistics.

With the H2H stat there is a little more information, but still nothing to qualify this as helpful. The only stat that seems to appear are the record of the team’s last ten games. You can look and see who the teams played and what the results were.

A well-known name in Atlantic City since its opening in May 1978, Resorts Casino continues to provide casino games in addition to its new sportsbook to New Jersey residents. The company was an important first step in shaping the Atlantic City scene we know today, becoming the first resort casino in the city and the first legal casino outside of Las Vegas.

After a long battle for ownership of Resorts Casino and all of its properties, DGMB finally took over its operations in 2010. The company immediately remodelled the casino into a Roaring 20's theme and signed an agreement with the owners of the Mohegan Sun, to take over operations of the casino and hotel.

After the Supreme Court ruling in 2018 that made sports betting legal, Resorts announced agreements with DraftKings and SBTech to open and operate a sportsbook. Both companies are well known and experienced in this department. SBTech has done software for many of the other sportsbooks in this ranking in addition to DraftKings and Resort Casino.

The software company has over 50 partners around the world who depend on its award winning services. Sportsbooks who use this software tend to have a large variety of markets available, good live sections and reliable customer support. The company currently has more than eight global offices around Europe, America and the Middle East. It has also won multiple awards for its software and has more than a thousand employees and over ten years of experience.

All sportsbooks
Review rating: 5 / 5
Rate:
Add a review Leave a comment
Unfortunately, most people only write reviews when they are dissatisfied, and when they are satisfied with everything, they are silent. We ask you to also fill in the «Good» field so that your feedback remains as objective as possible. We are sure that you will be able to specify both pros and cons of the sportsbook Resort Casino.
Comments