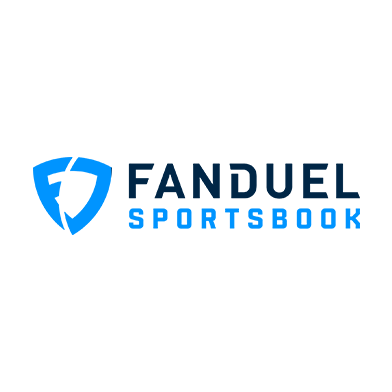 For the sport of hockey, FanDuel Sportsbook features only one league, the NHL. We were able to look at nine different games on different days to find accurate margin averages. The total margin average was at 4.14, a number that would fall into the good category on the Legalbet ranking. The markets looked at were the result and the over/under market on total goals.

There are multiple leagues available on FanDuel for basketball. The markets looked at were the result and the total over/under on the number of points scored. The total average for all the leagues and games was at 4.5. This places the entire sport into the good category on Legalbet.

FanDuel offers a wide variety of sports both prominent and lesser known. The list of sports is conveniently placed in A-Z order on the left side of the screen. The main four American sports are featured, including the NHL with whom FanDuel was the first to sign a partnership with. Both professional and college football are featured as well as professional and college basketball.

In addition to the top four, MMA, golf, tennis and soccer have markets available. The site also has offers on non-traditional American sports such as Cricket and Rugby. The list of sports is conveniently placed in A-Z order on the left side of the screen. There is also a ‘Live’ tab at the top of the page where you can scroll down the website’s live matches of every sport, looking at live spreads, odds and totals wagers as well as live scores.

The most popular sport in America and what many consider to be its National Pastime, FanDuel offers a vast number of bets on NFL games. Canadian Football League (CFL) games are also offered. Match winner bets are offered as well as Winning Margin (4-way) and Totals bets. The pre-made parlay bets are also available in football like baseball where you can bet on parlays that were put together by the bookmaker.

For example, some of the parlays featured on a football game include a handicap on the home team and and over/under bet on the total points. A single game can have more than five of these types of bets. Prop bets on who will score the first touchdown or which players will score a touchdown period can also be found.

NFL futures are bets made before the NFL season begins, you can also place wagers on Conference winners, Offensive and Defensive Rookie of the Year, Super Bowl winner and more. FanDuel also offers a name the finalist’s category, where you can choose the two teams that you think will face off against each other in the Super Bowl.

There are also options to pick the two teams that will play in the Super Bowl, on which conference the winning team will come from and on the specific result of the game (this includes both of the teams playing and the winner). FanDuel also caters specifically to its New Jersey audience with special Futures bets available for both The New York Giants and The New York Jets. 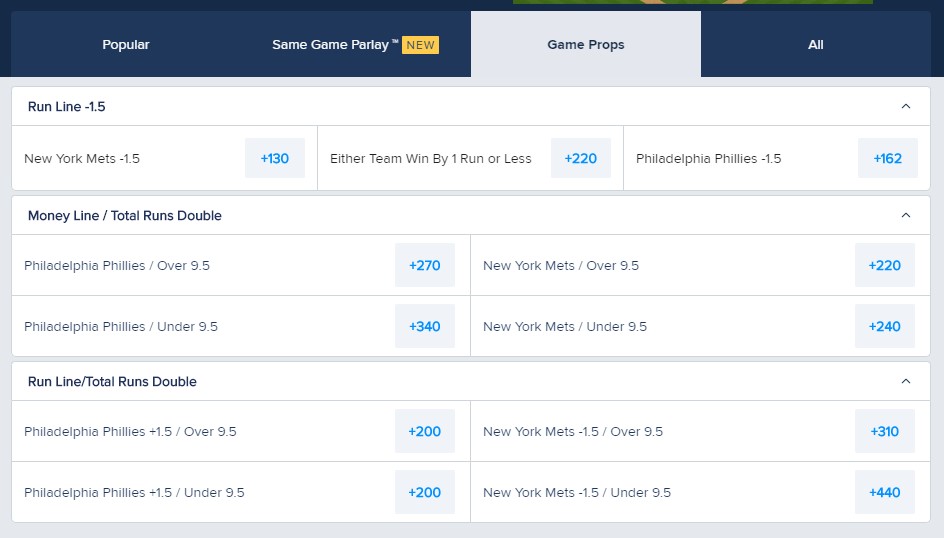 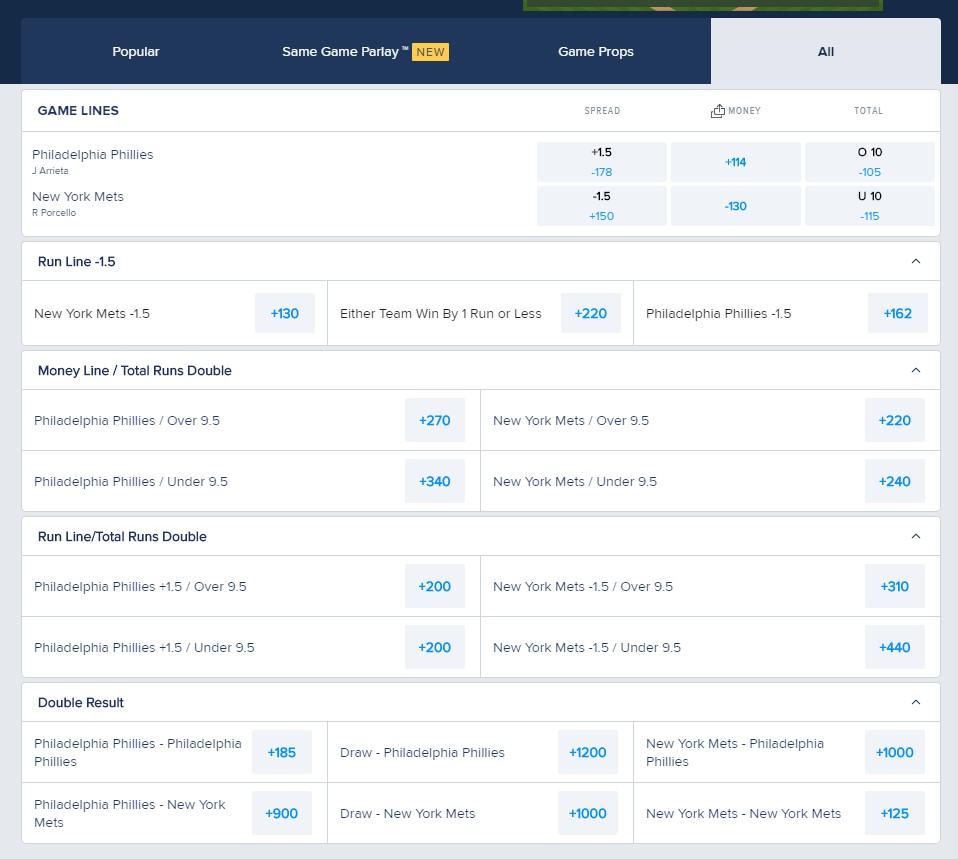 Baseball is on par with football in terms of number of bets and attention given to the sport. The sport is premiered front and center of the scoreboard. In baseball you have many choices for placing a wager. There are also live bets during the game that update every inning such as run lines, total runs, and final score.

For the main time, there are bets available on the money line, totals and bets with handicaps. The section also features a few already made parlay bets. For example you can find automatic parlays combining money line and the total runs runs or a handicap with an over/under bet.There is also a main focus placed on the pitchers and how they will perform. In games where the starting pitchers are well known you can bet on the number of strikeouts that will be thrown.

The wagers range from common which give you a fighting chance to come out ahead like the winner of the game and totals and rare bets like whether a player will hit a grand slam or not during the game. In total there are well over ten different offers for each baseball game more or less depending on the magnitude of the game and the starting pitchers.

Though still growing rapidly in both popularity and quality, soccer is a sport in America that has yet to break even with the other top four sports. However, the MLS is gaining more popularity everyday and with the emergence of national star Christian Pulisic the country will soon want to pay attention to this worldwide sport.

FanDuel features a multitude of bets on soccer, on all the top five leagues and others including of course the MLS the UEFA Champions League. On FanDuel, you can find the same bets for MLS that you can find for the top five European Leagues. You can make over/under bets, double chance and what the final score will be. You can also put your trust into one player and bet on who will score the first goal of the game. 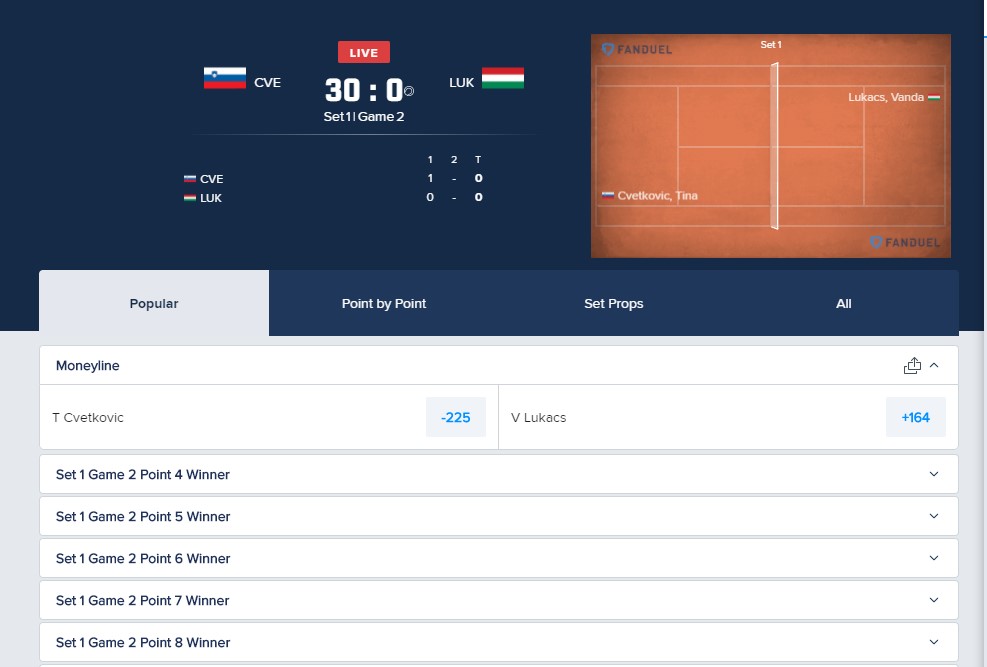 The live betting on FanDuel deserves a high amount of praise. Thanks to their scoreboard, they are able to update every game currently being played live to the minute. They also offer a watch live feature where you can see not only live scores but also live statistics from the game. The scoreboard takes up most of the home page and is very easy to navigate.

Scrolling up and down will show you live games first and then upcoming games the further you scroll. This a helpful tool but does not replace a live broadcast of the game by any means, which are absent from the website. The scoreboard also features every sport and divides them by sections in order of prominence. FanDuel also features a “Daily Odds Boost”, where upcoming games whose odds have been heightened are displayed.

Pros:
Interface is really smooth and good looking, easy registration, bet options are great.
Cons:
Bonuses are not flexible, they offer only one, FanDuel’s lines differ from competitors and their odds are more expensive than others.

FanDuel is a sports betting company that was started in 2009 and is based in New York City. The subsidiary has since gone on to win numerous awards including the Webby Award for best sports mobile app twice in 2015 and 2016, and TechCrunch’s best sports and entertainment startup in 2010. Today, it sits as the second most popular online sports betting company behind DraftKings.

In addition to being successful and popular FanDuel has expanded their knowledge through numerous acquisitions. These acquisitions have been in different sectors to ensure they provide the best up to date analytics and a trusted reliability for all users.

FanDuel has been running their software through Amazon Web Services since 2012. Including the companies many technologies such as Amazon RDS for Aurora, AWS Config, and Amazon Kinesis among others. Director of Architecture Alan Murray and Head of Infrastructure Steve Hunt have both praised the software technology with Hunt praising the ability to allow users to make changes and submit entries without problems.

All sportsbooks
Review rating: 5 / 5
Rate:
Add a review Leave a comment
Unfortunately, most people only write reviews when they are dissatisfied, and when they are satisfied with everything, they are silent. We ask you to also fill in the «Good» field so that your feedback remains as objective as possible. We are sure that you will be able to specify both pros and cons of the sportsbook Betfair / FanDuel.
Comments